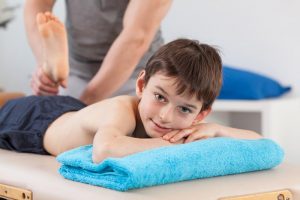 Pediatric chiropractic is known to be the most popular form of practitioner-based complementary and alternative medicine (CAM) therapy for children. Its primary focus is to provide wellness care to children, and at present many parents prefer to have their children submitted to this alternative treatment. Chiropractic treatments are provided to those with musculoskeletal and non-musculoskeletal conditions.

In short, chiropractic care aims to restore the baby’s nervous system to optimal function so that the baby’s body can heal itself. We often times forget the wisdom of the body and think that the baby needs drugs. What is need most often is restored communication between the baby’s inborn, innate intelligence and the baby’s built-in drug store: the baby’s body. BTW, this is also true for adults.

The most common chiropractic techniques include diversified, Gonstead, Thompson, and the KST low impact methods. Chronic conditions involving the nerves, muscles, vertebrae and infection problems are some of the conditions commonly treated with complementary and alternative medicine (CAM) approaches.

Researchers found that the three primary reasons for chiropractic care were respiratory and nose, ear and throat problems and neuromusculoskeletal conditions.

With an estimated 10 million new cases annually, ear infections or otitis media is one of the most common illnesses affecting young children and babies worldwide. Ear infections are torturingly painful, especially among children. This is the foremost reason for visits to pediatricians.

For many children it has even become a chronic condition, necessitating treatment year after year, even imposing risk of hearing problems or damage, speech problems and developmental problems. It is commonly treated with antibiotics. However, repeated or constant intake of this type of drug may result in drug-resistant bacteria that flout the drugs, eventually becoming ineffective against pain. Some even undergo surgical treatments for it, which may also turn out to be futile.

Chiropractic treatment helps in a different but very effective way. Some physicians use upper-cervical (cervical is doctor-speak for the neck) manipulation which focuses on the occiput which is the back of the skull, and atlas which is the first vertebra in the neck. Gentle and specific adjustments to these areas usually helps by mobilizing the drainage of the ear through the eustachian tube. This reduces the pressure build up in the ear and when the pressure is gone, so is the pain. Chiropractic adjustments also improves the baby’s immune system so that the baby can better fight off infections.

Another problem common to children is allergies. Irritated sinuses, itchy and red eyes and frequent sneezing due to pollens and dust are some of its symptoms.

Chiropractic practices do not treat these allergies, but help open the vertebrae where the nerves are directed to the lungs, nose and sinuses. This eventually helps ease the condition and makes breathing easier.

Pediatric chiropractic treatments are indeed helping many children in many ways, however, some people are still skeptical about considering it as an alternative or complementary treatment for their children’s condition.

Here are some of the pros and cons of chiropractic care:

The only thing that negates the above mentioned benefits is that chiropractic services may not be covered by your insurance.

Call Us Text Us